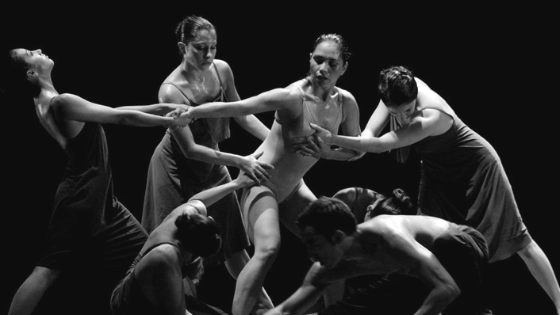 The beautiful thing about art is that it’s always changing. Aesthetic preferences shift from generation to generation, and new ideas are constantly surfacing, reshaping what already exists. Ever since the Western dance aesthetic branched out from ballet in the early 20th Century, words like “modern,” “post-modern,” and “contemporary” have been thrown around to describe these new forms of dance.

The problem is that no one quite agrees on what name to use. You’ll see a dance studio offering “modern” classes, but they’ll really be teaching what most people would call contemporary. So You Think You Can Dance calls just about anything that’s barefoot “contemporary.” Contemporary seems to have become a term to use when you don’t know what else to call it. But there must be more to the story than that.

Let’s get this out of the way. I think a lot of people come into the dance world without realizing that there are two very distinct camps here. This could be a whole post in itself so I’ll keep it brief, but it’s an important thing to understand for this topic.

Concert Dance – Think The Nutcracker, modern dance companies like Paul Taylor, site-specific work, dance theatre, experimental stuff. It’s a huge category that encompasses all dance that is made in order to communicate artistic intent. Whether that’s telling a story, provoking thought about a social justice issue, defying stereotypes, or whatever, concert dance goes deeper than pretty kicks to fun music.

To draw a parallel with movies, commercial dance is like the lighthearted comedies and family-friendly stuff that’s supposed to make you feel good, or the action movie that has very little plot but lots of cool explosions. (Cough cough Transformers.) Concert dance is like a drama movie, something with plot and depth that makes you think.

This article from Millennium Dance Center describes the difference very well, if you want further reading.

What does all that have to do with modern/post-modern/contemporary? Well, my long-winded definition was basically just to give context for this statement: This article will focus on the definition of modern, etc. as it applies to concert dance only. We’re leaving commercial dance out of the picture for now, because it just complicates everything royally.

You really need a whole dance history course to put modern dance in its proper context, but I will try to give you the essential information. You can Google any of the names I mention here for more details.

Notice something about the words we’re trying to define. The words Modern and Contemporary mean basically the same thing: now. Of course, what was happening “now” back in 1950 is not what’s happening now in the 21st Century.

That covers modern and post-modern, which fall into relatively clean historical eras and philosophies. But contemporary is not so clean-cut. Let’s see what some experts have to say about it.

What the Experts Say

This article from Dance Magazine interviews 10 dance professionals about the difference between modern and contemporary dance. I recommend reading the whole thing, but here are some highlights.

Contemporary is more a term you would use for something current, but it has a more integrated aspect, so you’d use a mixture of things—ballet and modern. – Jean Freebury, Reconstructor and Former Member, Merce Cunningham Dance Company

Contemporary movement is whatever is influencing art, architecture, and how you process, read, and develop movement at any given time. But these labels usually come in hindsight, or after establishing a style or a technique. There’s no real school of contemporary technique. – Patrick Corbin, Artistic Director, CorbinDances, NYC

Contemporary is a collection of methods that have been developed from modern and postmodern dance. It’s also a cycle of shedding techniques we’ve learned in favor of personal expression of movement. Where modern dance moved against the grain of ballet, contemporary moves against the grain of classical modern techniques. – Jennifer Archibald, Artistic Director, Arch Dance, NYC

If you have a classical piece on pointe, the moment they lean off pointe and take their weight off balance, it would be considered contemporary classical. Somewhere along the line these words got to be nouns rather than a description of the movement. – Glenn Edgerton, Artistic Director, Hubbard Street Dance Chicago

That last quote helped me the most in understanding what “contemporary” means. Take a pre-established dance technique, be it ballet, modern, jazz, or otherwise, and put a new twist on it. Fuse two styles together, put it to non-traditional music, do something that the founders of that technique would not have done. That’s what makes something contemporary.

I think that’s why it’s so hard to put your finger on what exactly contemporary dance looks like. Every choreographer’s contemporary is going to be different from the rest, and it really can be a name for anything that doesn’t fit cleanly into a category.

How would you define contemporary dance? Let’s discuss in the comments!