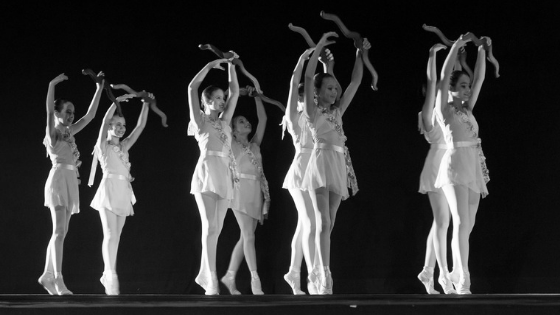 As a young dance teacher, the opportunity to direct a production is truly a blessing. That task is typically reserved for the highest-ranking faculty or the studio director. Your first directing job is a mid-career achievement in the arts world, something to be done after you’ve gathered up a trove of credentials. But I’m here to tell you it doesn’t always work like that.

I want to give you the details of how I directed my first original production at age 22, creating something completely from scratch, all while keeping up with a college schedule. I also want to share how I grew that into something even bigger the next year, and where I hope to take it in the future.

If you’re a young teacher who thinks directing is a long way off, I hope this helps you realize that it doesn’t have to be. My achievement has very little to do with personal skill. I was completely clueless about directing; I simply had a dream and figured out how to make it happen. You can, too.

It’s important to understand the context in which this production took place, because it might look very different for you. I had a lot of things working to my advantage, but there were some pretty big hurdles, too.

This was a student production at a low-budget dance studio in a small, artsy town. The people in this town absolutely love the arts. They’ll go to galleries, concerts, outdoor abstract performance art experiences, whatever you throw at them.  In other words, there was a market for new shows.

One huge advantage I had for making this production a reality was the fact that we had a performance space in the studio. We were located downtown, and there was a door off Main Street that led right into a large studio space. There were lights mounted on the ceiling, curtains for the mirrors, everything we needed. (The studio’s performing company used this space a lot.)

When I started teaching at this studio in the 2015-16 school year, one of the first things I noticed was that, though they had a thriving ballet program, they didn’t do a Nutcracker. Having grown up performing in the Nutcracker every year, this saddened me that the students didn’t get to have that experience. I knew how much performing classical ballets grew me as a dancer, and I wished these students could have that as well. But I was the new teacher on the block, so I didn’t say anything at first.

That spring, the Moscow Festival Ballet performed at my college, which was in the same town as the dance studio. And to my surprise, it wasn’t just the dance majors that showed up. I remember looking around the lobby at intermission and noticing how much of the audience was from the surrounding community. Families, elderly couples, tons of people who didn’t look like “college kids.” I even saw a few of my students in the audience.

That week in class, I asked for my students’ thoughts on what they saw. One of them, a junior in high school, said that this was her first time seeing a full-length ballet. That blew my mind. For someone as serious about dance as this girl to have never seen a ballet was heartbreaking. When you live in a small town, I guess that’s how it goes. Well, not on my watch. At that moment, I made my decision. This studio was going to do a Nutcracker.

Sometime before summer break, I casually asked the studio owner (with whom I had a good relationship) if they had ever done a Nutcracker. Her reply was basically, “That would be great, but I just don’t have time.” She suggested that if I was interested in doing some kind of show, I should discuss it with the other teachers. So that’s what I did.

The next part is actually kind of hilarious in retrospect. I spent hours and hours that summer drafting a huge proposal, complete with a budget, rehearsal schedule, plans to order costumes, literally everything I could think of. The thing was fifteen pages long. It had a table of contents. I was so extra.

Off went that huge document into the inboxes of every ballet teacher at the studio. I don’t think anyone actually read it, and honestly I don’t blame them. Fifteen pages!

But it got a conversation started. We went back and forth a few times with ideas, then the conversation died. I went back to school thinking, well, I tried.

Then, a life-changing phone call.

The studio director called me and said that if I wanted to put together some kind of production, that was fine with her, as long as I directed it. She was too busy, so she decided to give me free reign. I literally did a happy dance in my apartment. I was going to direct a show!

At our first teachers’ meeting of the year, I asked the ballet teachers if they were willing to stay after and talk about the show. Only one stayed, but his advice was worth a whole room of teachers. Being much more experienced in the dance world than me, he helped me see that my plan was a little too ambitious, and that it was better to start small. Perform in the studio, use simple costumes, pick something on a smaller scale than the Nutcracker to start. Eventually, it will grow.

Having a mentor, or at least someone to ask for advice, is a must for new directors.

(As you read on, you’ll notice that my goal of doing a Nutcracker hasn’t actually happened yet, but we’ve done two great shows that are building up to it!)

We decided that rehearsing outside of regular class time was too much of a commitment to ask of teachers, parents, and students on the first go-around.  Instead, I asked the teachers if they would be willing to put together a simple routine with their students for an end-of-semester showcase. 1-2 minutes, no fancy formations, just something to show off what they’d been working on so far. Most were willing, and I was able to get one dance for each level, ages 10ish and up. (The rest were too young to learn a dance that quickly.)

Students could choose whether or not they wanted to participate in the showcase (hence the no-fancy-formations requirement). I gave a handout with all the details, including a detachable permission slip that they could return to their teachers, signed by the parent, saying whether or not they were participating.

For music/theme, I picked excerpts from the Pictures at an Exhibition Suite and had teachers choose which one they wanted to choreograph to. (This was all done by email.) The suite idea worked well for the showcase format.

Keep reading for more details about the final product and tips for a smooth rehearsal process.

This year, I made a few changes that allowed us to tell a heartwarming holiday tale, complete with scenes and characters, without completely straying from the structure we established last year. One teacher for each level taught a dance to their class, but we also implemented optional Saturday morning rehearsals.

I made a Google form for the parents to fill out if they wanted to sign their kids up for Saturday rehearsals. They put their availability (9-10am, 10-11am, or both), knowing that I would “cast” the two time slots based on who could come when. A few weeks in, I cast two character roles from the pool of Saturday kids to learn the “acting” scenes. With these outside rehearsals, we were able to add 3 dances and 2 acting scenes to our show!

For music/theme in year 2, I picked a holiday storybook (“The Mitten” by Jan Brett) and broke it down into scenes. I expanded on the story a lot, having the mitten go on a big adventure through all kinds of wintery scenes that could be turned into dances. The teachers picked their own music this year, based on what winter scene they were doing. Again, all through email.

I’m already making plans for the upcoming 2018 production. Little by little, we’re growing this tradition into the classical Nutcracker ballet that I dreamed of when I started working here. This year, I want to put on Act II of the Nutcracker, calling it “The Kingdom of Sweets.” We’ll transition to Saturday rehearsals only, holding auditions at the beginning of the school year to cast various roles. I also want to transition to performing outside the studio, perhaps renting space at a local church.

Show Day and the Final Product

Because our show was only 25-30 minutes long, I was able to schedule our dress rehearsal and two performances all on the same day. Here’s what the schedule looked like this past year:

I hope this incredibly long post gave you some insight into directing a small student production. Please leave any questions or comments below! What didn’t I cover that you want to know about?